The team races against the clock to complete all nine tasks, armed with their Belbin reports and their initiative! 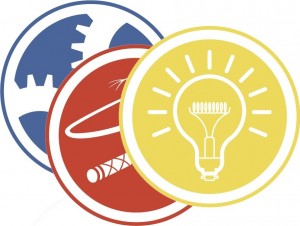 Contribute is the more Team Role-focused of the two Belbin team building exercises. It is designed to demonstrate the strengths and contributions of each of the 9 Belbin Team Roles, developing the team’s understanding of the roles within a learning environment.

Contribute is made up of nine different tasks, involving everything from caption writing to guiding other members of the team onto a sheep pen. Each exercise corresponds with a Team Role and the team must decide who should perform each task. The team’s objective is to collect all nine Team Role awards within a certain time limit.

Contribute helps the team explore its strengths and weaknesses. What did they do when they realised they had no Completer Finishers and five Shapers? How will they overcome the gaps and overlaps in their team when back at work?

First launched in 2000, Contribute has been used to help thousands of teams in a variety of ways including:

How does it work?

Contribute can be run with 4-9 participants, and takes approximately one hour. The feedback and debrief can take as long as required. It is strongly recommended that each participant has completed their Self-Perception Inventory, and obtained a minimum of four Observer Assessments prior to commencing the exercise. The reports play an important part in allocating the nine tasks, and so time should be set aside to ensure that each participant has had the opportunity to read through their report beforehand.

The trainer’s manual contains pointers for observation and feedback to the team. Questions to be raised after completing the Contribute exercise can include: